Showing posts from July, 2015
Show all

July 27, 2015
Not too long ago, when I was just a teenager, (okay, maybe it was a while ago) people that lived together without the blessing of marriage were frowned upon – unaccepted by society.   Not many couples did it.  Now, it has become the norm.   Today, 70 – 90 % of young people will live with someone of the opposite sex (in a relationship) before they marry.  It is understandable that the younger generation fears marriage when 50% (almost 60% in Florida) of them come from broken homes.  Even baby boomers, that have experienced divorce, are now moving in with their partners to live out of wedlock.  Many of them have no intentions of marrying.  There is also a trend among people over seventy, who have lost spouses to death, to forego marriage and “live in sin”.  They can’t afford to give up their departed spouses’ retirement and social security benefits to marry. At one time, it was believed that living together, first, would damage your chances for a successful marriage.
Post a Comment
Read more

July 20, 2015
Marriage is hard – maybe the most difficult part of our lives we’ll ever have to deal with.  Although parenting, at times, may run a close second, we would never think of divorcing our children out of our lives.  We love them unconditionally, much like God loves us. So why don’t we go into marriage with the same attitude?  Our spouses should mean more to us than our own children – according to the Bible.  Matthew 19:4-6 “For this reason a man will leave his father and mother and be united to his wife and the two will become one flesh.  So they are no longer two, but one.  Therefore what God has joined together, let man not separate.” NOTHING should come between a husband and wife; man should not separate them.  God never mentions that about our relationships with our children.  We’re only given them for a season, and then they are expected to move on and become their own person – the person God created, not us.  Our spouse should stay with us for life. Marriage was in
Post a Comment
Read more 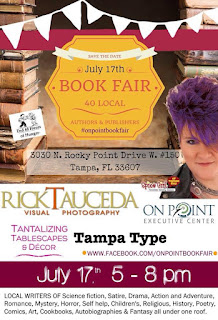 Please join me this Friday, July 17th at On Point Executive Center, for this exciting event!  I will be there with both of my books, "GPS to a Joyful Marriage", and "When Superheroes Fall".  Bring a copy of this blogpost and I will give you a 20% discount on your purchase. Admission is free to the public so please join us to meet local authors.  There will be door prizes, delightful snacks and a fun evening! The fair showcases over 40 local writers published in a variety of both fiction and non-fiction genres including science fiction, satire, drama, action and adventure, self-help, children's religious, cookbooks, and autobiographies. All guests are asked to bring a nonperishable food item(s) in support of the Tampa chapter of End 68 Hours of Hunger   http://end68hoursofhunger.org/tampa-fl/ .  This program puts nourishing food in the hands of elementary school children to carry them through the weeken
Post a Comment
Read more

10 Things Men Can Do to Make Their Wives Happy

July 13, 2015
Mark Gungor (Laugh Your Way to a Better Marriage) talks about the difference in keeping score between men and women.  Just for getting out of bed in the morning to go to work, a man may believe he earns 100 brownie points.  Giving his wife a dozen roses should easily earn him 500 points and hold him over for a few months without any other attempts to make points. (So he thinks.) Points equal doing your job as a husband. The more points accumulated account for a happier wife. From a woman’s perspective, though, a dozen roses will earn him one point as would a single rose or even a new car.  Men can make their wives the happiest by taking the time to figure out exactly what makes her feel the most intimate towards him.  (Sorry guys.  It’s probably not anything from Frederick’s of Hollywood.  That’s your idea of intimacy.) It’s usually the simple acts, not the fancy cars or vacations, that will make us feel the closest to our man.  And by the way, gentlemen, more brownie points
Post a Comment
Read more
More posts

"In a world where fifty percent of marriages will fail, GPS to a Joyful Marriage is an excellent tool for Christians seeking to improve or restore their marriage. Sandee writes in a way that is humorous, honest and insightful as her wisdom comes directly from the healing of her own marriage. A practical book that provides biblically based techniques on how to build a healthy marriage." Suzanne Accardo, M.Ed. Certified Life Coach